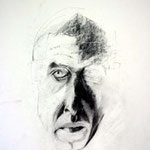 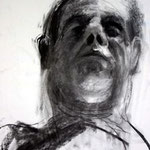 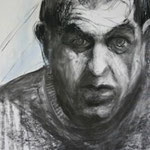 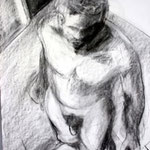 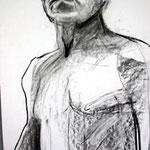 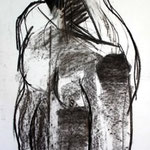 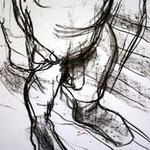 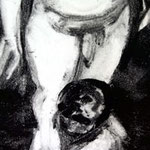 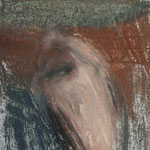 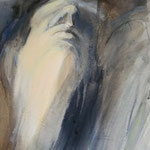 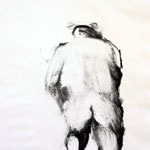 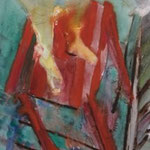 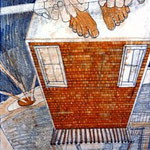 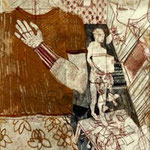 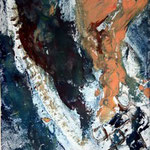 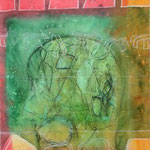 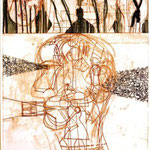 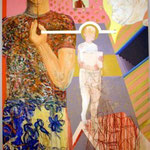 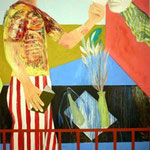 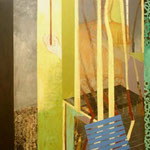 Geoff Morten’s work centered directly on his search for an identity. He used figuration as the basic means for exploring the issues of isolation and alienation .

“The figures I employ (in the paintings) are not portraits – they refer to themselves and to nature/life as a whole. In that way, I have no intention of reproducing an experience, place or event – but I can derive images from those situations which are remembered, imagined or invented and then the paintings/drawings become things in themselves – and hopefully more powerful, with the ability to touch a wider range of shared human experience.”

However, the power of these figures lies in their history rooted in the self portrait – charcoal and graphite drawings done in front of a mirror in his studio from 1991 onwards. Placing the mirror on the floor beneath him he would create all the information he needed to produce the images of figures standing on top of chairs, buildings, descending ladders and walking tightropes – all those risky, real and imagined death defying scenarios of his paintings.

When people asked if the ‘guy’ in the picture was him, he would usually say ‘no’ – the image was of a ‘universal man’ whose predicament or situation in which he found himself could apply to many people. This was true to a certain extent, but it was his way of side stepping the obvious personal questions which would inevitably follow, and which he did not want to answer.

Geoff felt the work should speak for itself – his personal language revealing an iconography referencing biblical stories, medieval magic symbols and metaphors gleened from a rich diverse sourcebook of the simplicity of country lore to the sophistication of the writing of Camus and Sartre.

This exhibition demonstrates how Geoff Morten used himself as model for all the male figures which appear in his work. The early drawings show a strong figure standing defiantly, chin thrust forward, shoulders squared, fists clenched – ready to take on the world.

Time passes, the head appears to be thrown back in a scream in some of the head series, the figure struggles uphill in ‘Nightly Climber’ and ‘Yew Treader’ or stands on the precipitous edge of a rooftop.

Hope returns briefly as the figure pledges allegiance to the flag or rides the crest of a wave, only to finally emerge as a cut out template of a head filled with the memories of treasures and symbols of a past life or a shadowy figure holding on to singularly thin tree of life in ‘You Can’t See Me’.